Volvidon is an armadillo-like Fanged Beast that inhabits the Plaines de sable and Volcan regions. The Volvidon will attack the hunter using its long tongue, strong limbs, paralytic saliva, foul smelling gas, and a ricochet-jump. First appearing in Monster Hunter Portable 3rd, it is red, armour plated, and slightly larger than an Aptonoth.

It preys mostly on Neopterons, as shown in both its Introduction Video (where a Bnahabra is eaten) and when the actual monster is low on Stamina (it feeds on Altaroth in their nests). It is capable of spitting out a paralyzing liquid and inflicts Soiling using a foul odor. Being a Fanged Beast, the Volvidon retains attacks similar to those of Arzuros and Lagombi.

Information is taken from mhp3rd.net 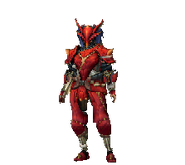