Overseer of the Ancients, Empress of Flame

Lunastra is a female Elder Dragon introduced in Monster Hunter 2. 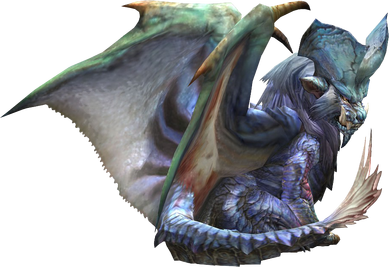 They are known to breathe concentrated streams of fire, as well as cloak themselves in a scalding aura.

Lunastra, and their male version Teostra, are unique monsters because they actually use their Flame Sac to produce a fire breathing effect, rather than just a beam or a fireball. The Lunastra can produce a highly flammable powder and, by using its wings, spread it across the air. It then gnashes its teeth to create a spark, which then causes the powder around itself to ignite and explode. The explosions have random range; they can be either close, reasonably far away or very far away from where she's standing. If the sparks are red, then the explosions will be close, but if the sparks are yellow, then the explosions will be distant.

Lunastra is the female counterpart to the Teostra, though the two are rarely seen alongside one another. Like Teostra, her flame-producing abilities can be diminished if she is poisoned or her crown-like horn structure is destroyed.

They are known to inhabit hot areas such as volcanoes and deserts, and are specially adapted to utilizing the Fire Element.