Ludroth are highly aggressive and territorial aquatic monsters of the Leviathan family. The females of the species are known simply as Ludroth, while the less common (and much larger) males are known as Royal Ludroth.

Female Ludroth are mostly yellow-green in coloration, with long sinewy bodies that enable swift and sweeping underwater movements to confuse their prey. Their claws are stubby but effective, and their tails taper into a thin, fan-like shape.

Ludroth are known for their aggressive and territorial nature, as mentioned, and females are often known to stake out breeding grounds and form "harems" around a single Royal Ludroth. Ludroth can be troublesome on land, using their snake-like forms to slither and pounce on hunters, and also spitting a corrosive solution that causes Waterblight, making stamina recovery slower. They emit a barking noise when threatened, and although dangerous on land, they are doubly so when confronted underwater. Notably more powerful, swifter, and with attacks that may disorient a hunter caught unaware, a Ludroth in her natural habitat can be a challenge; small crowds of Ludroth are also more often found underwater, and can quickly part even an experienced hunter from a good volume of their health. 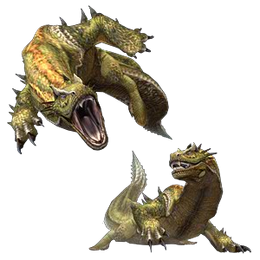