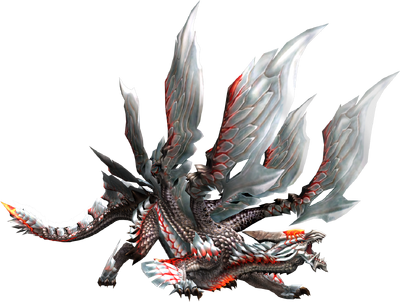 Harudomerugu is an Elder Dragon that has a skeletal structure that superficially resembles those such as Kushala Daora. Unusually, Harudomerugu has four pairs of wings instead of the typical two pairs. Its scales are black in color, but this cannot usually be seen because of the metal coating it protects itself with.

Harudomerugu has the unique ability to manipulate a kind of liquid metal as a defense mechanism. Its powers over this metal are so strong that it can cause metal projectiles to home in on a target, form out of thin air, or attach to its own body for use as weapons. When Harudomerugu enters a state of rage, it is constantly surrounded by a puddle of this metal that causes harm to anything that steps in it.

Additionally, Harudomerugu coats its body with metal that seems to be in a solid form, but is actually liquid being held onto its body through the use of its powers. Most notably, this metal attaches to its wings in a way that allows it to fly - when the metal dissolves, its wings are revealed to be thin and tentacle-like, incapable of lifting Harudomerugu into the air.

Harudomerugu is aggressive and will use its metal-controlling abilities to attack anything that approaches it. It will also use its powers in a more defensive manner, such as causing metal to rain from the sky around it.