Bulldrome is the alpha leader of the Bullfangos, and is both stronger and larger. It inhabits a wide variety of environments and can be encountered at any Hunter rank. 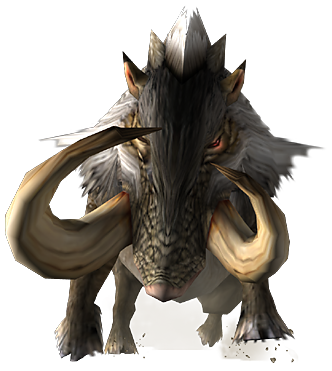 Bulldromes have larger tusks than Bullfango, and a layer of white fur, as opposed to Bullfango's black fur. Bulldromes are more agile when running and proficient at finding and locking onto their victims.

They have excellent tracking skills, and can be very aggressive towards their accompanying pack of Bullfango when hungry.

Bulldromes can be found in the Snowy Mountains, Swamp or Old Swamp, and in Monster Hunter Portable 3rd, the Misty Peaks and Tundra.

HC Bulldrome appears older, with extremely long, large tusks and a mohawk on its forehead. It is capable of great strength and unexpected behavior, including body slams and lifting large chunks of the ground to toss at Hunters.